Gladstone | Invest where industry are currently investing in

If any one tells you that Gladstone is a mining town, tell them they don’t know what they are talking about! Gladstone is an emerging city that includes a multitude of Industry, with Coal Seem Gas the newest Resource coming into play that will not only put Gladstone higher on the map but will dramatically improve the whole of the Queensland Economy! And you can be a part of it now.

GLADSTONE has 10 industries – ensuring that the economy of Gladstone remains the Number 1 regional city for property investment being a strong and strengthening region. The town of Gladstone will more than double in current size making Gladstone a city. It has been planned that Gladstone construct another 9,000 dwellings over the next 10 years to meet current and growing demand for housing and rental accommodation.

Major industries within the Gladstone Region include:

If one includes the improvement in infrastructure such as Roads, Rail, Shipping, Airport, Schools, Universities, Hospitals, Retail Stores etc, Gladstone will become a main central hub for the Surat Basin 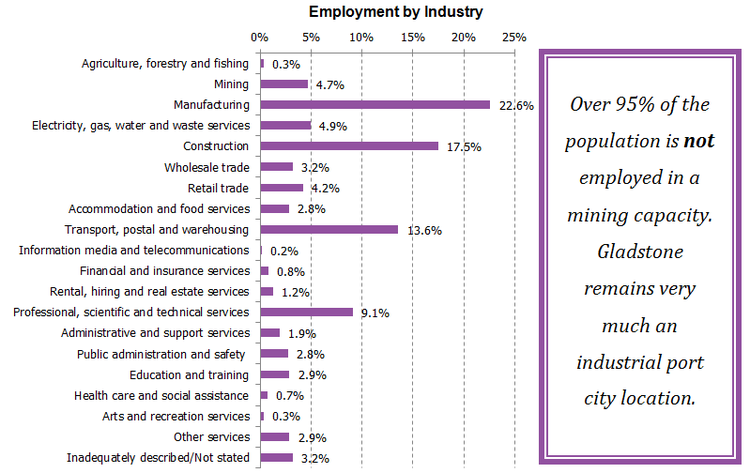 The Gladstone region is one of Queensland’s economic ‘power houses’ and has been identified as the centre for Queensland’s burgeoning CSG-LNG industry. The vast scale of emerging LNG projects in Gladstone is already generating economic impacts across Queensland.

In Gladstone itself, the outcomes are considerable – from front-end engineering plans to actual construction of LNG production trains, with economic benefits flowing to the region as a whole. The CSG-LNG projects are also generating major requirements for residential accommodation in the city.

The recent announcement by Devine Ltd regarding the unveiling of plans for a new $1.4 billion masterplanned community in the rapidly growing central Queensland city of Gladstone has investors sitting up and taking note!

Current Population growth will exceed the current build capacity of suitable dwellings to accommodate the growing population of  Gladstone. Construction has been forecast to provide further employment over the next 12 years. The demand for rental of new homes is high and outweighs existing and older properties in Gladstone.

Employment Opportunities in the area has already outstripped supply with tens of thousands of jobs emanating out of the $96 Billion Infrastructure spend. This is an ongoing trend into the foreseeable future as more projects come online.

The Queensland government estimate that the LNG industry will generate around 18,000 new jobs and add around $850 million per year to the economy for at least the next 10 years. The promise of Thousands of construction jobs is just the start of a wave of economic impacts and associated supply / demand imbalances.

The first and major impact is the dire shortage of Housing!

Tourism and Farming continue to underpin economic growth in Gladstone but the LNG projects will take Gladstone into the next phase.

New infrastructure highlights include improved Road and Rail plus Boat and Coach services, to cater for the increased population and movement of supplies for both construction and growth purposes. The Gladstone Airports makes the region easily accessible by air to and from the region.

Recent and anticipated population growth is testament to the continuing opportunities that the Gladstone Region presents as a location of choice in wich to work, live and Invest.