The state government has invested over $1.5bn on major infrastructure items in the western corridor since 2005,

a further $500m has been announced to support the growth objectives in this corridor! 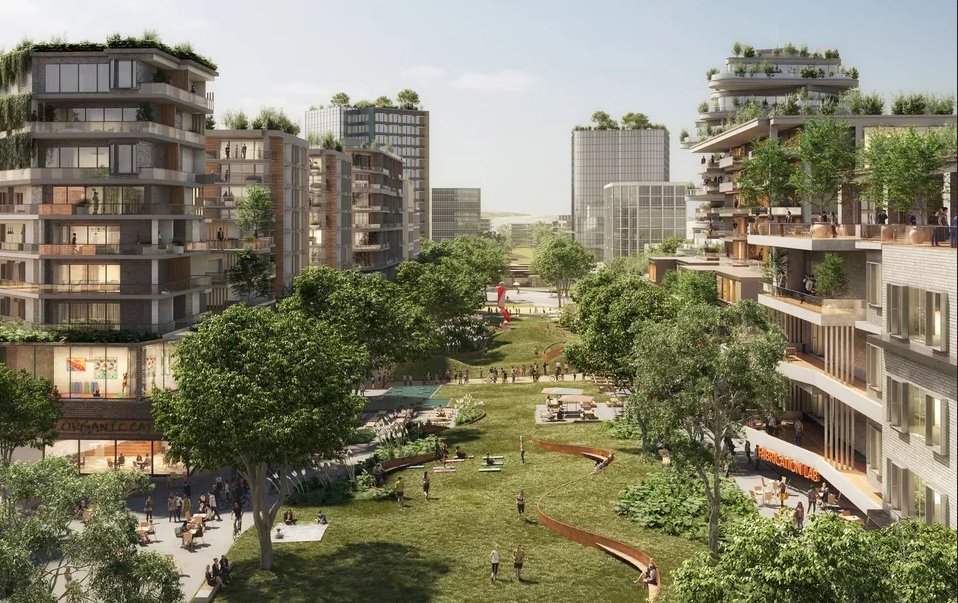 Sekisui House, one of Australia’s leading community developers, has revealed for the first time its $1.5 billion masterplan vision for Ripley Town Centre, the only designated major retail and commercial hub earmarked for the Ripley Valley region “properT network advocate to invest where both government and industry are investing in a location which is primarily Owner Occupied …. Providence ticks all these boxes and more.”

Live or Invest in Australia’s fastest growing community in Ripley

This is South East Queensland’s fastest selling growth corridor with Providence being a visionary new town under creation in the beautiful Ripley Valley.

Just 44 minutes from Brisbane CBD, 15 minutes from Ipswich CBD and 8 minutes from Springfield. This new address will feature a vibrant town centre, 3 schools, medical and commercial precincts, a waterpark and a grand network of green parklands.

The Ripley Valley has been designated by the QLD State Government to be South-East Queensland’s largest and fastest selling residential growth corridor and will be home to over 120,000 people in 25 years time.

Nestled in the heart of the Ripley Valley, Providence is a community of authentic, welcoming neighborhoods, each fostering a genuine sense of belonging. It’s a place that reflects the spirit of the past, while providing the benefits and opportunities that can only be found in Australia’s most visionary new town.

Ripley is strategically located in the South East Queensland growth corridor, positioned between the economic growth hubs of Springfield and Ipswich.

Over the past five years, Ripley’s population has expanded by 24% which translates into an annual growth rate of 4.8%.  The Queensland Government’s Statistician’s Office has forecast that by the year 2036 Ripley’s population will have boomed to a total of 104,610 residents.

According to the 2011 census 81.3% of Ripley’s residents fully owned or were in the process of purchasing their dwelling. Home ownership is almost 20% higher in Ripley as compared to Springfield, representing a strong owner occupier market. An important fact for investors = less rental competition and wider resale target market !

In response to the rapid population growth within the Ripley catchment, the Ipswich City Council and the Queensland State Government have committed to building five new schools in the surrounding areas.

St Andrew’s Hospital is a private hospital and is a short ten-minute drive north of Ripley. St Andrew’s is currently undergoing an expansion which will almost double the number of beds from 97 to 178. The $64-million-dollar expansion will create 300 new permanent jobs and include a new private emergency centre, intensive care unit and a new maternity unit.

At the heart of Ripley is the $1.5-billion-dollar Town Centre. This milestone project will service the 120,000 people that will call Ripley home over the next 20 years.  The first stage of the town centre has a project value of $40 million and will create 100 construction jobs and an additional 100 on going jobs on completion in March 2018.

Expertly designed for a more authentic community from the outset the design of Providence has a clear and unbreakable vision to be a progressive, vibrant and modern new town incorporating true neighborhood living

By its very definition, Providence is about nurturing and care, a value held dear to the team building this visionary new town focusing on the essence of community but within a beautiful natural environment … residents content to call home

House and Land packages available to own to Live or to secure an astute Investment to grow prosperity, ask us below 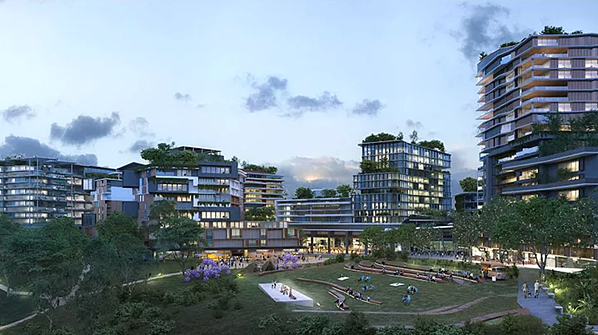 The $1.5 billion Ripley Town Centre that will service the rapidly growing Ripley Valley region in the Western Corridor of Ipswich is set to become a reality with construction under way on the highly anticipated project.

The milestone development will create an exciting new regional hub that will service up to 120,000 people expected to call the Ripley Valley home over the next 20 years.

The Town Centre will service Ecco Ripley and the broader Ripley Valley, which is set to become one of largest pre-planned communities in Australia.

The Brisbane-based Hutchinson Builders, one of Australia’s largest construction companies, commenced work in February on what is destined to become a thriving new heart for the Ipswich region.

The Ripley Town Centre, which will ultimately comprise a broad range of commercial and retail spaces, a dining precinct, regional transit hub, community and entertainment facilities as well as residential, and is expected to be a major growth catalyst for the Ripley Valley.

The first stage of Ripley Town Centre has a project value of $40 million and will create 100 construction jobs and 100 ongoing jobs on completion in March 2018.

It will comprise a marketplace-style centre totaling 9,400 sqm, anchored by a 3,800sqm Coles supermarket and supported by 20 specialty stores, a medical centre and commercial office space. Tenants have already committed almost 80 per cent of available space in this stage.

The $10 million in civil works included upgrades to Ripley Road and associated infrastructure, laying the groundwork for Sekisui House’s a long-term commitment to Queensland’s booming south-east corner and the staged Ripley Town Centre and Ecco Ripley development which has a combined project value of $2 billion.

“The commencement of construction for the Ripley Town Centre is a game-changer for Ecco Ripley and the western growth corridor,” says Sekisui House Australia CEO and managing director Toru Abe.

“This is the beginning of what we believe will become an important commercial and community heart for Ripley Valley and South East Queensland for many years to come.

“Ripley Town Centre is a milestone project that will be a catalyst for continued growth of the region.
The scale of this project is comparable to Springfield and Northlakes, both of which have been pivotal in improving capital values and building strong communities with their own unique identity.

“We have been warmly encouraged by the strong sales achieved since the first releases of land at Ecco Ripley, and the sense of community that we have already created.

“Ripley Town Centre is a showcase development that provides a clean, green environment in which to live, work, play and rest. It will become the new heart for the broader Ripley Valley.

“This is just the beginning of our long-term commitment to this region to create a living environment that is world-class.”

Ecco Ripley is the urban core project within the 4680ha Ripley Valley Urban Development Area that is expected to ultimately house 120,000 people. The community was awarded a Five Star Green Star Rating in 2015.

Ripley Town Centre is also working towards Green Star accreditation through energy efficiency measures, including rainwater harvesting and the use of photovoltaic solar panels on roofs and car park shade structures.

The plans represent a collective design approach by Sekisui House to Ecco Ripley and the Ripley Town Centre, with the aim of providing a highly liveable, sustainable environment.

Ripley Town Centre is a staged project that will be developed in line with population growth, supported by a transport hub that can accommodate bus and rail services. Provision has been made for a rail corridor connecting to the Springfield and Ipswich line.

The project incorporates new generation urban design principles to include a range of open spaces, featuring the Ripley Town Park that backs onto Bundamba Creek. The design also includes the latest fibre-optic network connections for businesses and residences.

Ripley Town Centre alone is expected to create 20,000 new jobs for Ripley Valley when fully completed. It will also bring 257,000sqm of gross commercial, office and retail floor space to the market and create 2,000 new dwellings.

The broader Ecco Ripley project, which will ultimately comprise 4,000 homes housing about 10,000 people, is expected to be a key player in accommodating forecasts of a near doubling of the City of Ipswich population to around 327,000 by 2041.

Hutchinson Builders Managing Director Greg Quinn said he was thrilled to be involved in helping bring the Ripley Town Centre to fruition.

“This is a significant project for the Ipswich region and more broadly South-East Queensland,” Mr Quinn said.

“As a proud Queensland company with a history dating back more than 100 years, we see the Ripley Town Centre as one of those rare projects that will benefit the local community on a generational level. This is the start of something big and we are honoured to be a part of it.”

“This is a significant milestone for the City of Ipswich with a major new town centre to service the many thousands of people choosing to live here,” he said.

“Our workforce is growing, our appeal as a destination is growing and this world-class development we are witnessing in Ripley Valley is adding to that appeal.

“This new town centre is realising the incredible potential in Ipswich.”

Sekisui House has revealed its $1.5bn masterplan vision for Ripley Town Centre in the heart of Brisbane’s western growth corridor. You would be aware that Ripley Valley is declared as a priority development area with 4,680ha just southwest of the fast growing Ipswich CBD

The Ripley town centre will comprise of 40ha of major retail and commercial space to cater for a planned 133,000 new residents by 2036. The town centre development is expected to generate around 20,000 direct jobs, a massive infrastructure boost for this priority development area.

Stage one is a $40m delivery which includes a Coles, a mix of speciality shops, medical centre and office space is completed and occupied with Stage two in final planning which will feature a medium to high rise residential seniors living development and further retail space with seamless access to healthcare, education, recreation, commercial, community, sporting facilities and a proposed train station all within a 20 minute walk

Sekisui’s plans are for a masterplan setting the benchmark around the notion of community and connectivity in a sustainable environment for generations to come and a shining example of urban construction living harmoniously with nature. A sustainable cityscape incorporating high rise living and other modern architectural, lifestyle, cultural and environmental concepts. With a vision of crating a low carbon footprint and a community with everything one needs at their fingertips in tree lined streets, inviting pedestrian walkways, cycle paths and integrated transport options for convenient commute